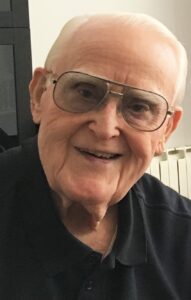 Richard Strain, citizen of the world and Boys Ranch alumnus, left us peacefully on Wednesday, February 19, 2020, at the U.S. military hospital Landstuhl Regional Medical Center in Germany, after a long illness.

Richard was born in Amarillo, Texas, on March 20, 1930, to Joseph Garnett Strain and Sarah Strain née Mullins. His fraternal twin brother, Robert Ray Strain, was born minutes later on the same date. The boys spent the Depression years with their mother in Amarillo at 616 Jefferson and 308 N. Lincoln, until she passed away on Oct. 18, 1939.

The twin boys found themselves in the Amarillo office of Boys Ranch founder Cal Farley one winter day shortly after losing their mother. Mr. Farley explained to them that he had just started a home for young boys about 35 miles Northwest of Amarillo, and then invited Richard and Robert to jump into the back of his pickup with three other boys to start the long drive out to Old Tascosa, where Boys Ranch is located. Thanks to Mr. Farley, Richard and Robert were given a fresh start on life, becoming the 19th and 20th boys to arrive at Boys Ranch. At the time, the ranch consisted of an old courthouse, a one-room schoolhouse, and the adobe home of Old Tascosa’s last living resident, Frenchy McCormick.

Richard graduated from high school in Dumas, Texas, in 1949, and then worked for Boxwell Brothers Funeral Home there. Knowing his Boys Ranch background, Ivan Boxwell wanted to offer Richard a profession and so had planned to send him to the School of Mortuary Science in Houston.

History decided otherwise. With the advent of the Korean War, Richard was accepted into the U.S. Navy, shipping out from San Diego, CA. He spent five years aboard ship in the Pacific, putting into ports in South Korea and in Japan. Before discharge from the Navy in 1954, Richard was able to travel through Japan by train, crossing the devastated cities of Hiroshima and Nagasaki, to visit his brother Robert, who was recovering from serious injuries incurred in combat in South Korea as a member of the U.S. Marine Corps. Robert spent the remainder of his life in Amarillo, leaving this world after a heart attack, in 1990 at age 60. He is buried at Boys Ranch cemetery.

Richard enrolled at Texas Tech University in Lubbock and spent two years studying economics. Although he loved economics, a side of himself said “college life is not for me.”

He left Lubbock to join the U.S. Air Force, completing his basic training in Texas. In 1957, his first assignment took him to Royal Air Force (RAF) Upper Heyford, England, where he met his future wife, Herta Maria Ebner, from Mariazell, Austria. They married in Oxford, England, on April 18, 1959. Sixty years later, they celebrated their Diamond wedding anniversary in Madrid and Cadiz, Spain. They had one daughter, Carol Anne, born in Chisledon near Swindon, England, in 1961.

After 30 years, 2 months, and 22 days of service, including his Navy years, Richard retired from the U.S. Air Force in September 1981 as a Chief Master Sergeant. Never one to shirk work thanks to his time at Boys Ranch in the early days, he retired a second time in 1995, from the U.S. civil service where he managed telecommunications operations for the Ready team. He went on to volunteer at the American Red Cross until the final months of his life. In his spare time, Richard loved to fix pretty much anything, especially fiddling with old radios and tuning cars. He also enjoyed reading, writing, telling stories, swimming, biking, camping, and traveling the globe, mainly driving across the Alps in Europe in his van, listening to country music greats such as Merle Haggard, Conway Twitty, Patsy Cline, Jim Reeves, and Tammy Wynette, and European pop groups including Abba and Boney M.

Immediate surviving family members are Richard’s wife Herta, with whom he resided in Otterbach and Weilerbach, Germany, after military retirement; his daughter Carol, who lived for more than 30 years in or near Paris, France, with her husband Pablo Guzman, from Quito, Ecuador, before they moved to Madrid, Spain; and their son Andreas, who currently works as a filmmaker in Hong Kong SAR, China.