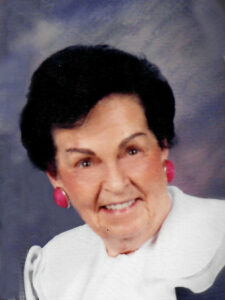 There will be a viewing on Thursday evening 7 p.m., October 17, 2019, at Boxwell Brothers Funeral Home. Services will be held at 10:00 a.m., Friday, October 18, 2019, at Arden Road Baptist Church with Pastor Aaron Denson officiating.  Burial will be in Llano Cemetery following the service.  Arrangements are by Boxwell Brothers Funeral Directors, 2800 Paramount Blvd, Amarillo, Texas.

Mom, “Nan”, went to be with Jesus on October 12 after a long and fruitful life; we are going to miss her greatly but rejoice that we will all be together again in Heaven someday.

Mom was born Alice Lucille Robinson on May 22, 1921, in Thompson, IA. She was the youngest of three children born to George and Selma Robinson, who were in the gas and oil business with Phillips Conoco. She grew up and attended high school in Thompson, IA, where she excelled scholastically, musically as well as athletically.  She was the Iowa Women’s State Free Throw Champion her senior year and runner up her junior year.  The most important decision for her life was also made during her high school years when she spoke of “trusting Jesus as her Savior.”

Following high school, where she had met her husband to be, Burnell Lund (Dad), she stayed in Thompson and worked for the next 6 years while continuing to date Dad, who upon high school graduation stayed on the farm to help his father in nearby Rake, IA.  After a long courtship, Alice Robinson and Burnell Lund were married on April 18, 1943.

After a year of married life on the farm, Dad made the decision to enlist in the Army Air Corps. The next several months were spent crisscrossing through Oklahoma and Texas during various stages of flight training, ultimately transitioning to B-25 bomber school. The wars in Europe and Japan ended prior to deployment, though, and Dad and Mom were discharged from the military after the conflict.

The next step in Mom and Dad’s lives involved moving to Sioux Falls, SD, where Dad attended Augustana College and completed his undergraduate degree in three years. After Augustana, they spent the next four years at Luther Seminary in St. Paul, MN, in preparation for full-time Christian ministry. Following graduation, they embarked on a life-long ministry in service for Jesus Christ. During the 33 years that followed, they served in parish ministries in LeRoy, MN, Mauston, WI, Viroqua, WI, and Rapid City, SD. They took early retirement in 1984 to provide support and assistance to their family.

After their retirement, they played a critical role in encouraging and building into their expanding family. Dad and Mom have also stayed active in congregational ministry, serving as interim pastor in Norfolk, VA, Clovis, NM, La Crescenta, CA, Van Nuys, CA, Phelen, CA, and Lockney, TX. As always, Jesus has been their message!

As their children and extended family, we have been blessed by our intimate connection to Mom and Dad over their long and fruitful lives. Their example of love, faithfulness, and service during their 71-year marriage has made a lasting impact on all of us.

We are going to miss Mom: wife, mother, grandmother, great-grandmother and friend, but we know a new day is coming! Mom often reminded us that we will all be in Heaven one day and when that day comes, we will have a great celebration.  Mom’s passing brings sadness with separation but challenges those of us left behind to live faithfully for Jesus until our time comes to meet the Lord.

Mom is survived by sons Tim and Tom, 11 grandchildren, and 14 great-grandchildren. She is preceded in death by husband, Burnell, sons, Burnie and Jon, and 2 brothers.