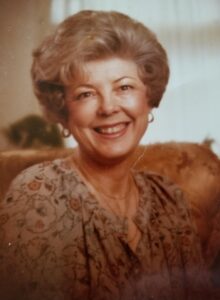 She grew up in Caddo, Bryan County, Oklahoma, where she graduated from Caddo High School. She married the love of her life James V. Adkins. After graduation, they went to California for about two years, returning to Oklahoma in 1947. They came to Amarillo, Texas, in 1948, where Willa was a seamstress for a dress designer for a while. She then went to work for S.W. Bell Telephone Co.

In 1960, Willa joined Beta Sigma Phi. She held the following offices; Vice President of City Council. Willa also received the following honors; Outstanding Girl and Valentine Sweetheart. She served with pride for eighteen years and continued to be associated with Neta Sigma Phi for 53 years. Willa was a past member of the Women’s Department of Amarillo Chamber of Commerce, The Amarillo Art Force. She served on the River Road School Board. She was a member of Hillside Christian Church. Willa and her husband James Adkins founded the Kitchen Gallery and Gifts in 1971 and sold the store in 1987.

She is preceded in death by her parents Steve and Leona Troxell, her husband James V. Adkins, both of her daughters Linda Adkins Weiss in 1990 and Elizabeth Denise Spencer in 2018 both of Amarillo. A great-granddaughter Karmi Villalobos in 2000, and a brother Donald Eugene Troxell.

She is survived by her granddaughters Diane Sweet and husband Joe Sweet and Angela Mount, grandsons James Doyle Walker of Ohio and Kevin Spencer of Amarillo, and son-in-law, Scott Spencer. She is also survived by five great-granddaughters and one great-grandson, one brother Morris Grant Troxell of Oklahoma, and two sisters: Tommye Troxell Craven and Glena and husband Wendel Short of Amarillo. Also, eight great-great-grandchildren and numerous nieces and nephews.