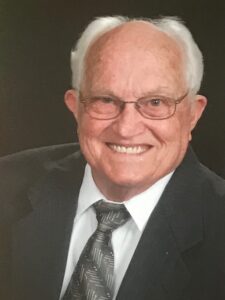 Samuel Alan Gilmore, DVM, 82, passed away Friday, July 5, 2019 at BSA Hospital in Amarillo, Texas.  Alan was born October 29, 1936 to Franklin and Faye Gilmore in Brownsville, Texas, the second oldest of 5 children.  He graduated from Brownsville High School in 1954.

Alan served in the Army from 1955 to 1958 and was in the reserves until 1963. He attended Texas A&M University and received a Doctorate of Veterinary Medicine.  He practiced as a small animal veterinarian for several years before moving on to the United States Department of Agriculture (USDA), serving as Circuit Supervisor covering all of New Mexico and southwest Texas before retiring in 1994 after 30 years.

Alan married Martha Williams on September 14, 1979 in Albuquerque, New Mexico where they made their home.  During his years in New Mexico, Alan discovered a love for off-road jeeping.  After retirement he started the very first Family Motor Coach Association (FMCA) jeep club and served as president for 7 years.  During this time it became an international club with over 350 families as members.  Alan and Marty traveled for 14 years — exploring the beauty of our country and visiting friends and family — before settling in Alamogordo, New Mexico and then finally Amarillo, Texas so he could be close to his beloved granddaughter. Alan loved to spend time with family and friends, work in his beautiful garden, and spoil his 3 dogs.  Alan had enjoyed playing football in high school and later watching sports on television. He had a great sense of humor, and never shied away from being pranked. His granddaughter, Madison got away with painting his face and putting jewelry on him among other things. Alan had a huge giving heart for helping others, participating in such voluntary activities as Meals on Wheels, English as a Second Language (ESL), and Snack Paks For Kids. He was very active in his church and loved to sing in the choir.  Alan’s biggest passion in life was the Lord.

A Memorial Service will be held on Wednesday, July 10th, 2019 at South Georgia Baptist Church at 11:00 am with pastor Mike Martin officiating.

In lieu of flowers the family requests memorials be made to South Georgia Baptist Church, 5209 S. Georgia St. Amarillo, TX, 79110.