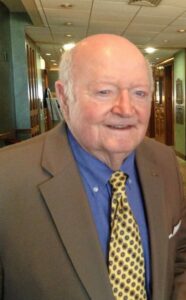 Bob was born in Helena, Arkansas, on January 28, 1927 to Charles Clyde Curl and Jesse Harkness Curl. He attended Washington and Lee University in Lexington, Virginia and the United States Naval Academy in Annapolis, Maryland. He graduated as an Ensign USN in 1947 with the Class of 48-A, the last of the three-year War Classes. After several tours of duty in the Navy, he resigned his Commission in the Navy and in 1950 married Glenna Wright Robertson of Norfolk Virginia and returned to Arkansas to help his ailing father in the family lumber business. Bob was recalled to the Korean Was in 1951 and served until 1953.

He entered the Life Insurance Business in 1954 and recently retired after a distinguished career with Northwestern Mutual Life of over 50 years.

Bob had a lifelong love of sailing and he and Glenna had many wonderful sailing adventures with friends from Lake Meredith to Virginia and Maine. He was an avid outdoorsman, loved to hunt and fish and skied the mountains of Colorado well into his 80’s. He lived by and taught his grandchildren the Honor Code and the importance of doing things right or not at all. Bob never met a stranger and had a personality that filled a room.

Bob was a Presbyterian. He was preceded in death by his parents; a sister, Laura Gene Baker; a brother, Charles Clyde Curl, Jr.; and sister Jess Harkness Wilson.

Arrangements are being handled by Boxwell Brothers Funeral Directors.