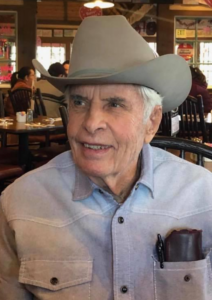 Graveside services will be at Llano Cemetery. Arrangements are by Boxwell Brothers Funeral Directors, Amarillo.

He and his family moved to Texico, New Mexico in 1950. He attended high school there graduating in 1952.  He wrote the words to the school song which they still use today.

After high school, he worked for the Texaco Refinery in Amarillo for 28 years, Naval Reserves Seabees for 16 years, and National Guard for 4 years and retired in 1979. While in the Seabees, in 1968 he was called to active duty and served with MCB 62 near Danang, Vietnam. August 23, 1968 attacked with mortars and rockets.  There were 3 KIA and 4 MIA. All battalions were awarded Navy Combat actions ribbons.

After the Texaco Refinery closed in 1985, he moved to Las Vegas, NV starting his own handyman business. While in Las Vegas, he met and married the love of his life, Colleen Sprecher.