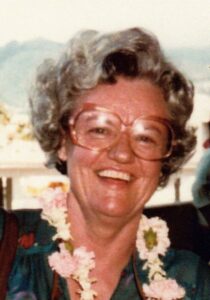 After she graduated from high school, she taught ballroom dancing at Arthur Murray Studios where she met Dan Thornberry, a student.  They married September 1, 1951, in Amarillo and later divorced.

She graduated from the University of Oklahoma in 1969, with a Bachelor of Science in Pharmacy.  She worked at several pharmacies in the Texas Panhandle during her career as a pharmacist.