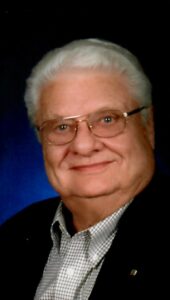 Memorial services will be at 2:00 P.M., Friday, October 11, 2019, at First Baptist Church with Dr. Howard Batson officiating. Burial will be private. Arrangements are by Boxwell Brothers Funeral Directors, Amarillo.

Larry was born on April 29, 1941 in Fort Worth, TX. He was a 1958 graduate of Amarillo High School.
Larry was in the Amarillo High School Belcanto as well as all-state band and choir. He attended West Texas State on a voice scholarship where he was the first president and charter member of the Phi Mu Alpha Sinfonia fraternity.

He started his State Farm Insurance career in 1968. Being a State Farm agent for 47 years, Larry was privileged to travel with his family and make lifelong friendships with his fellow agents and great policyholders.

Larry enjoyed hobbies including golfing, woodworking, fishing and camping, and singing in choirs.  For several years he sang with the Revelations Gospel Quartet as well as for multitudes of funeral services around the area.  Most of all, he enjoyed spending time with family and friends.  Larry’s grandchildren were the light of his life, until his great-grandchildren came along.  He will be truly missed.

He was preceded in death by his parents, Raymond and Beth Jones; and nephew, Ray Jones and wife Judy Jones.