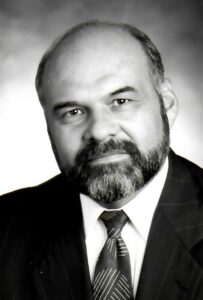 Ray was born in San Jose, California but he was raised, went to school, and entered into law enforcement in Menlo Park, California. Ray went into city management and went into college and graduated from St. Mary’s College in Menlo Park with his Bachelor of Arts & Management degree. Ray continues his education in San Francisco and received his master’s degree in public administration from the University of San Francisco. He was then offered a job in Eagle Pass, Texas as Chief of Police. After his service to the community of Eagle Pass. He then moved to Austin, Texas and after a few years traveled to a TAMAC convention in Lubbock, Texas where he met the love of his life “Gloria”. Gloria took one look at him and told her friend Tony Q, tell your friend to sit with me. And the rest is history! After a short time in New Jersey as a fraud examiner, Ray & Gloria moved to Amarillo where they had a full life of family and countless friends.