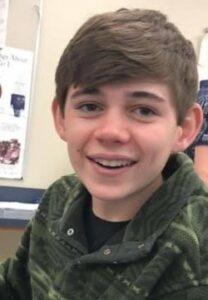 Services will be at 2:00 P.M. on Wednesday, September 11, 2019 at Boxwell Brothers Ivy Chapel, 2800 Paramount Blvd. with Mark Green, Associate Pastor at Amarillo Fellowship officiating.  Burial will be at Llano East Cemetery.

Quinten was born on February 5, 2003 in Amarillo to Donnie and Shannon Pond.  He was a student at Wildorado High School and currently playing football.  He loved to play basketball.  Quinten was the funniest kid that you ever met.

He was preceded in death by his grandfather, Steve Pond; uncle, Bobby Powers III; and cousin, Dylan Powers.

He is survived by his parents, Donnie & Shannon Pond; his best friend and brother, Brayden Pond; a foster brother, Tre Darnes; grandparents, Bobby and Faye Powers; grannie, Kay Pond; great-grandparents, Bobby and Deloris Powers; two aunts, Samantha and Fernando and Amber and James Shelnutt; an uncle, Danny and Holly Pond; cousins, Gage, Madi, Bryson, Braylei, Champ, Scotlynn; his B.F.F., Chloe Aduddell; along with so many other friends as he was a friend to everyone he met.

The family suggests monetary gifts be made to Wildorado athletics.