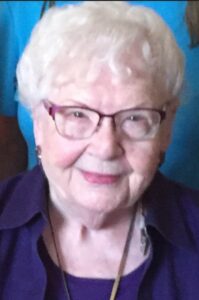 Services will be at 10:30 A.M., Saturday, November 2, 2019, at First Baptist Church with Dr. Howard K. Batson officiating. Burial will be at the Dimmitt Cemetery. Arrangements are by Boxwell Brothers Funeral Directors, Amarillo.

She was born in Shawnee, Oklahoma, to Mauzee and Elmer Youts, and moved with her family to Dimmitt, Texas. The dust bowl years took them back to Shawnee until 1941, when they settled permanently in Dimmitt.

She married Bob Mooney in 1947. They moved to Borger in 1953, where Bob was employed by Joy Youts Motor Co., and returned to the farm in Dimmitt in 1961. They left Dimmitt with two children and returned with six.

Phyllis was preceded in death by her parents, her husband, Bob, her husband, Al, a great grandson, Rhett Moore, son in law, Bill Coffin, and brother in law, A.P. Sligh.