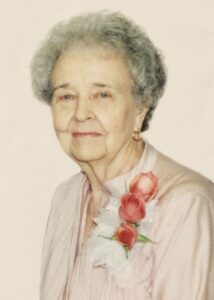 Mary Ann Barnard, age 99, formerly of Perryton, TX passed away peacefully on the afternoon of March 7, 2020 at her current home in Amarillo, TX. It was quite a day for her as she began her birthday on earth but finished it in heaven with Jesus and an endless number of family and friends.

Mary Ann was born on March 7, 1921 in Sterling, NE to Louie and Birdie Eden. She married the late J.E. Barnard on November 1, 1939.  They celebrated their 75th anniversary before J.E. passed away in 2015. They spent their married life ranching and farming in Perryton until they moved to Amarillo in 2008. They were members of First Baptist Church of Perryton and Hillside Christian Church of Amarillo.

Mary Ann was a smart and hardworking woman that treasured her family and friends. She attended Oklahoma College for Women prior to marriage and worked hard at many different jobs in her adult life. She was happiest when she was serving others. She volunteered at Ochiltree General Hospital as a Pink Lady for many, many years.

Mary Ann was a wealth of knowledge whether you needed to know how to prepare a meal for a small army, stretch a dollar or what was going on in town. Mary Ann and her circle of friends spent many mornings solving the world’s problems and supporting each other over a cup of coffee. Her door was always open, and the coffee was always brewing.

Mary Ann is survived by her children, Larry Barnard and wife, Joyce of Oklahoma City and Karen Gardner and husband, Terry of Amarillo; her granddaughter, Amy Barbee and husband, Brett; her great-grandchildren, Tyler and Grace Barbee; as well as two sisters-in-law, Lillian Eden and Reba Hanks and numerous nieces and nephews. She also leaves behind her dear friend, Vickie Merrill, who brought her countless hours of joy. Mary Ann was preceded in death by her parents; two brothers, Charles & Lowell Eden; her granddaughter, Angy Barnard; and a myriad of other family and friends.

The family would like to extend a special thank you to Brenda Christy, Maria Ford, M.J. Portillo and all the staff of The Care Cottage as well as Accolade/Texas Home Health for their love and care. In lieu of flowers the family suggests gifts to the Pink Ladies Auxiliary, Ochiltree General Hospital, 3606 Garrett Drive, Perryton, TX 79070.

A memorial service will be held at Yanda & Son Funeral Home Chapel, Yukon, OK on Thursday, March 12, 2020 at 10:30 a.m. Visitation will be held one hour prior to the service. Rev. Joe Williams of First Baptist Church of Yukon will officiate. Burial at Yukon Cemetery will immediately follow the memorial service. Arrangements are by Boxwell Brothers Funeral Directors, Amarillo.