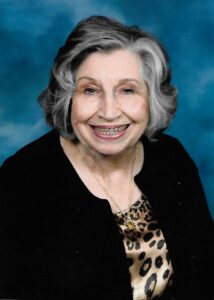 Madge Marie Gebhart West was born at Gould, Oklahoma, to Cora and Willie Gebhart November 10, 1928.  She graduated from Louis Hill High School in the Gould school district in 1947 and later took courses at Frank Phillips College in Borger, Texas.  She married Claudie West in 1947, moving to Borger in 1954. In 1994, they moved to Amarillo.  Claudie and Madge had two children, Phillip, born in 1951, and Beth, in 1957.

Their life in Borger revolved around Claudie’s car sales business and building homes as an independent contractor.  Madge was a homemaker and Claudie’s bookkeeper, title clerk, file clerk, and house plan coordinator.  In her spare time, she was active in a Child Guidance Group, where she worked as president for 4 years.  Her full club life included serving as president of the Adelante Federated Women’s Club and Borger Federated Music Club.  Music was one of her joys: she was in the Music Club Chorus and sang with the Frank Phillips College Chorus.  While in the latter, she had the opportunity to sing at Carnegie Hall in New York City, one of the high points of her life.  She appeared in numerous local performances throughout the years, many happening during her 17 years with the Barbershop Belles. She also sang with her church Praise Team for several years.  Besides club work, she was a Cub Scout den leader, a Brownie Girl Scout leader, and was active in three bridge clubs.  In 1976, the Borger News-Herald praised her hospitality; those friends and family who visited the West’s home fully agree —Madge made you feel at home!

She was preceded in death by her beloved husband of 69 years, Claudie West, in 2016; her son, Phillip West, in November of 2019; also, her parents, Cora and Willie Gebhart, 2 brothers and 5 sisters.

If desired, in lieu of flowers, memorials may be made to the charity of your choice.