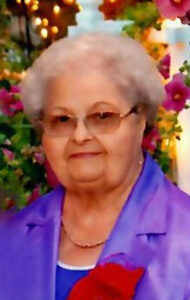 Louise was born in Bartlesville, OK on January 19, 1932 to Ed and Bernice Braymer. She graduated from Phillips High School in Phillips, TX in 1950. Louise attended Frank Phillips Jr. College in Borger, TX. She worked for Panhandle State Bank, which became Panhandle Bank and Trust, in Borger, TX. Louise retired from Amarillo National Bank in Amarillo, TX in 1989.

Louise was affectionally known as Babe, Mother, and Mimi. Her grandchildren and great-grandchildren were the joy of her life! She always asked about her Biddies (great-granddaughters).

We had big laughs with Mimi and her QVC Christmas.

She is preceded in death by her son, Alton Eugene Proffitt Jr.; daughter, Stephanie Messenger; and brothers, Veldon Braymer and Jim Braymer.