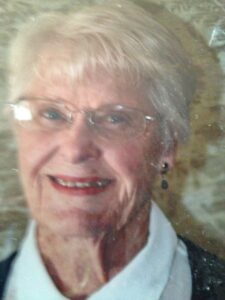 Lois Virginia (James) Garner of Fleming Island, FL passed away on August 25, 2019 at the age of 94.  Lois was born on April 4, 1925 in Stratford, TX to Mettie Taylor James and Walter Peleg James. She spent her childhood splitting her time between the ranch at Kerrick, TX and the home at Stratford.  She was the “bonus” baby born with her twin brother Louis “Buddy” James. The youngest of 10 children, she was known as “Baby Lois” all her life. She graduated from Stratford High School. She attended college to become a teacher.

Lois met Carl Raymond Garner in Dalhart, TX in 1947 while she was there to teach school.  They were married on September 13, 1947. In July of 1952, they welcomed a daughter, Patricia Sue.  In 1962, they adopted a daughter, Margaret “Leann”, at the age of 7. Both daughters graduated from Boise City High School.

Together, Carl and Lois owned and ran the John Deere dealership “Cimarron Implement” in Boise City from 1951 to 1995. After retiring, they traveled all over the world, but their favorite travels were to visit their daughters and grandchildren. Lois and Carl were married for 56 years until his passing in 2003.

Lois found joy in painting, quilting and baking. Many family members were the proud recipients of her paintings and quilts and cherish those gifts dearly. She volunteered at the local historical museum and senior citizens center. She was a lifetime member of Girl Scouts. She was a co-leader of her daughters’ troops.  She loved her time playing Bridge with the ladies of Boise City. She enjoyed studying history and created her family tree dating back to the Mayflower.

She is survived by her daughters Patricia and husband Joe Fowler of Middleburg, Florida and Leann and husband Terry Judah of Yukon, Oklahoma. She will be remembered with love by her four grandchildren and their families:  Tacey and husband Rodney Zimmerman of Yukon, Oklahoma; Shane and wife Ginny Fowler of Vero Beach, Florida; Lesley and husband Joshua Ogle of Commerce City, Colorado; and Christopher Fowler of Orange Park, Florida. She also was blessed with 10 great grandchildren whom she loved very much: Gavin Clodfelter; Maleah, Lane and Autry Zimmerman all of Yukon, OK; Brooklyn, Lila and Beau Fowler of Vero Beach, FL; Benjamin and Iain Ogle of Commerce City, CO; and Caleb Fowler of Orange Park, FL.

Memorial contributions may be made to the charity of your choice.