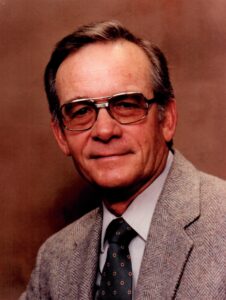 During this time, his 2 children (Rod and Terri) were born.

After discharge in 1957 he moved to Amarillo and taught science and coached football, basketball and track at Horace Mann, winning the City Championship in all three. Then he taught and coached golf at Palo Duro until 1965. He was in the Panhandle Sports Hall of Fame as Golf Coach of the Year in ’60 and ’63.

By the time he was 30, John knew he wanted to change professions. When his St. Farm agent retired, the opportunity presented itself. In 1965 he started his State Farm Agency. He was an agent for 50 years. He worked nights and weekends to build his agency. In 1990 a Business Brief in the Amarillo Globe News stated ” State Farm Agent John Parker was honored with the company’s highest award for Quality Agency Management when he was accepted into the Legion of Honor Society. Parker has been honored 14 out of 15 eligible years He was also recognized as being a member of the Silver Scroll Society, a group made up of those who have earned Legion of Honor awards for 10 consecutive years. Fewer than 500 of the State Farms’ 19,000 agents have this designation”.

John married Carolyn Hammond on October 30, 1982, at the First United Methodist Church in Colorado Springs. After he taught Carolyn to play golf, they were both spending a lot of time driving back and forth to the golf course. They decided to build their ”Forever Home” at Tascosa on the golf course. This provided a perfect place to walk their Labs. They had 5 over the 25 years they lived there, and ALL of them were members of the family. John faithfully took them for a walk every morning and every evening, regardless of weather. He had all the right gear for winter, because of his hunting ”wardrobe”.

John had a zest for life! His Dad passed on his passion for hunting and fishing to John.

John was a charter member of the Amarillo Bass Club and 7-time President. He spent many hours in his shop ”tweaking” his fishing lures, according to the reports of what they were biting at whichever lake the tournament was the next week. John felt that every tournament needed a ”cookout” and he took charge. After all, the tournaments were as much about fellowship as competitive fishing.

He was also an excellent hunter and liked to do his own reloading. His ”near record” Colorado elk rack hung over the fireplace in their home. Also, he had a shoulder mount buck, (his ”Birthday Buck”) shot on his birthday. The walls of the garage were lined with deer horns. He processed his own deer and was known for his venison jerky.

He never had a golf lesson, but he read Ben Hogan’s book ”The Modern Fundamentals of Golf” and took it to the course. He competed at the highest level during the early 1960’s, playing in many Amarillo Municipal Golf Tournaments.

He is survived by his wife, Carolyn; a daughter, Terri Duffy, of Phoenix, AZ, a stepson, Ted Hammond of Tyler, TX, and 5 step-grandchildren.