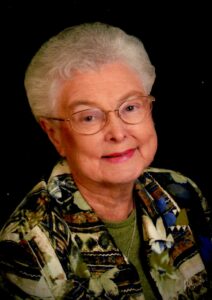 Joanne A. Stewart passed away peacefully on June 9, 2019.

Funeral services will be at 10:00 a.m. on Wednesday, June 12, 2019 in the First Baptist Church of Claude with Dick Gravely officiating.  Burial will follow at the Claude Cemetery.  Visitation will be held from 5:00 p.m. to 7:00 p.m. on Tuesday, June 11, 2019 in the First Baptist Church in Claude.  Arrangements are by Boxwell Brothers Funeral Directors.

Joanne was born on December 10, 1937 in Corona, New Mexico to Joseph and Zelfa Atkinson.  Joanne’s paternal grandmother and her father were pioneer ranchers in central New Mexico and Joanne loved to be on the Atkinson Ranch.

Joanne attended Eastern New Mexico University and earned a degree in Education.  While she was a student at Eastern, Joanne met Sam B. Stewart on a blind date and they were married on July 25, 1959.  Joanne then moved to Claude where she lived for the next 60 years.  Joanne taught third and fourth grades in Panhandle and Claude where she emphasized to her students the importance of using their best efforts and turning in schoolwork that was neat.  After retiring from teaching, Joanne worked with Sam and Jim Hubbard in the Stewart Insurance Agency.

Joanne was active in her community as a member of Eastern Star and Unity Study Club, and she faithfully served First Baptist Church in Claude in several capacities including Sunday School teacher, youth group leader, pianist, choir member, coordinating funeral meals for families and church clerk for over fifty years.  In her later years, Joanne thoroughly enjoyed volunteering at the Treasure Chest, playing bridge, singing with the Panhandle Singing Women and her rescue dog, Daisy.  Joanne was a selfless and devoted caregiver to her husband for twelve years.

The family extends special thanks to Mike Campbell, Janet Bilyeu, the staff at Claude Family Medical Clinic, The Arbors and Palo Duro Nursing Home and the many faithful friends who visited and called Joanne.  In lieu of flowers, the family suggests memorial contributions to First Baptist Church of Claude, the Treasure Chest in Claude, Claude EMS or to a favorite charity.

4 Replies to “Joanne A. Stewart”