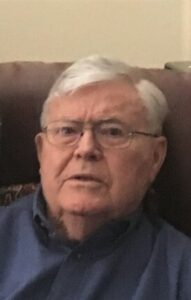 After graduation from Amarillo High in 1954, Jack joined the Naval Reserves where he served as a Radarman Petty Officer 2nd Class aboard the USS Bon Homme Richard CVA-2 and the USS Willett DE-354, as a Naval Reservist Crew Member. He received an honorable discharge in 1962.

On September 6, 1963, Jack married the love of his life, Katherine Ann McBride. Together, they have two sons, Shannon W. Jordan, of Oshkosh, Nebraska and S.L. Jordan, of Amarillo, Texas. Jack worked for the United States Postal Service for 35 years, starting as a mail sorter and retiring as Manager of Distribution.

Committing his life to the Lord at a young age, Jack strove to be an example of Christ. He lived humbly for the Lord and always showed his great love for Christ. He enjoyed teaching Sunday School, singing in the church choir, leading Worship Music, and was a beloved spiritual counselor.

Even as a boy, Jack liked to make people laugh. He will be remembered for doing silly things to bring smiles and joy to those around him. Jack loved his family deeply and showed this by assuming the obligation of caring for his family at a young age and continuing to care for and lead his family throughout his life. Jack was an artist, with a great eye for color, as seen in his paintings. He was also a talented and creative woodworker. Jack enjoyed life in a quiet way.