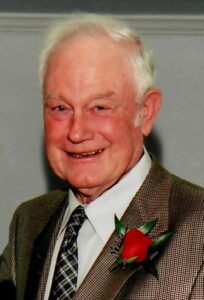 Graveside services will be at 2:00 P.M., Wednesday, April 29, 2020, at the Rose Hill Cemetery in Tulia, TX. Memorial services will be scheduled at a later date. Arrangements are by Boxwell Brothers Funeral Directors, Amarillo.

Sam was born in Tulia, TX on December 18, 1935, to Amy and William Caraway. After high school he served in the National Guard and began his farming career in Tulia, later expanding to Dumas and Panhandle.

He married Marlene Stubblefield of Happy, Texas in 1954 and they remained married until her passing in 2003. On July 10, 2004 he married Leona Fangman of Dumas, Texas.

After acquiring his ranch in Panhandle, he spent the last 15 years building a black angus cow-calf operation which he dearly loved, especially number 77. He always had a story to tell about his cows. Sam had a wonderful sense of humor, a smile, and joke for everyone he met. He also found joy in listening to the country music of his generation.

Sam was preceded in death by his brother, Paul Archie Caraway.