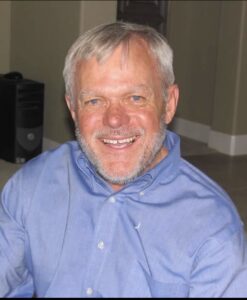 One of the few advantages of dying from cancer, is no longer bothering with sunscreen and no longer worrying about what you eat.):

George R. (Bud) Jowell IV was born in Pampa, Texas on April 27th, 1939.  He attended Hereford High and graduated from West Texas State University with a Bachelor’s degree in marketing.  Bud a Veteran of the United States Army.  He and his wife Carol Jowell (nee Alston) along with three children made their way back to Hereford after a 25 year hiatus.

In Bud’s professional life, he worked in the business of sales and had a gift of charming people.  Most anyone who spent any amount of time with him would agree that he was witty, charming and fun to be around, and those who didn’t think so were seldom around.  Bud truly tried to live a life as described in the poem “Desiderata”.

He was preceded in death by his parents, George R. Jowell III and Elizabeth Jowell (nee Brooks), and by his youngest daughter, Kelly Jowell Weber.  This was rather devastating, however, as Charles Swindoll wrote “10% is what happens to you and 90% how you deal with it.”  So, that is what he did.  There was not a day that went by that he did not think about Kelly and love her.  Bud is survived by his wife, Carol Jowell (nee Alston) of 55 years, and his two adult children: son, George Jowell V, and daughter, Angie Smith and son- in- law, Chad Smith. Also his sister Kay Cortello of Marble Falls, Texas.  Bud adored his two grandchildren.  He never missed a game, concert, or contest.  He truly put the “Grand” in Granddad.

Bud was given the gift of life, and now he has to give it back. This is hard. But he was a lucky man, who led a marvelous existence, and for this we are grateful. He was “good people” and surrounded himself with good people as evidenced here today.  He never complained about being in pain or being sick.  He chose to be joyful about having had a full life, rather than sad about having cancer and dementia.  He was a fighter and had a contagious positive spirit.   Amazingly, this outlook worked for him. (Well, you know, most of the time.)  He is at peace. On that note, he will take his mortal leave of this rollicking, revolving world-this sun, the moon, that walk around anywhere, and the memory of a child’s hand in his.

Bud loved his family and friends with no condition.  How lucky we all are to have had this man in our lives.  Metaphorically speaking, we will meet again, on the other side.

Bud’s memorial service will be Saturday, September 28th at 2:00 p.m. at the Hereford Senior Citizens.  The address is 426 Ranger St. Hereford, Texas 79045.  I lieu of flowers, the family requests donations to Hospice.  We have been overwhelmed by everyone’s thoughtful and kind deeds and responses.