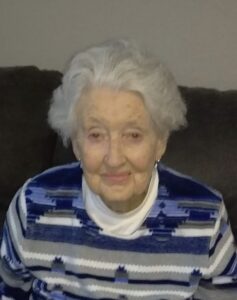 Memorial services will be at 2:00 P.M. on Tuesday, September 3, 2019 at the First United Methodist Church in Stratford with Rev. Gene Weinette officiating.  Private burial will be at the Stratford Cemetery.  Arrangements are by Boxwell Brothers at Stratford, 311 N. Main.

Eunice was born on March 4, 1927 five miles west of Stratford in Sherman County to Eric and Era Kirkwood.  She was born in the same farmhouse, same bedroom, and same bed as her three older brothers.  She attended school at Stratford but at age 16 met and married Roy Combs.  They lived in Griggs, Ok. for a year and then moved to 5th and Wall St. in Stratford.  To this union was born a son and daughter.

Her first love was her family.  She was a Mom, Grandma, Mema, & Elmo to all her family.  She enjoyed gardening and raised many beautiful roses.  She also enjoyed crossword puzzles and embroidery.  Eunice was a member of the First United Methodist Church all of her life.

She was preceded in death by her son, Roy Earl Combs on January 13, 1958 and her husband Roy Combs in September of 1972.  She then married Bob Abbott and he passed away three years later.  In July of 1982, she met and married Haywood Vaughn.  He preceded her in death in 2005.  She was also preceded in death by two grandsons and four brothers, BC Kirkwood, James Robert Kirkwood, Earnest Kirkwood, and Doyle Kirkwood.