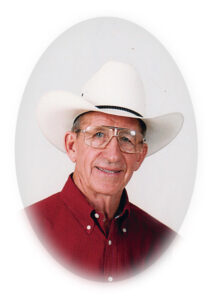 Dr. Farmer was born August 26, 1930 to Clifford David and Mildred Mary (Karr) Farmer in Emporia, KS. He married Nancy Pate Farmer on August 18, 1957. He graduated from Tucumcari High School. After graduating with a Bachelor of Science degree from New Mexico State University, he attended Colorado State University where he received his Doctor of Veterinary Medicine.  Dr. Farmer and Nancy were longtime residents of Tucumcari, NM, where he lived out his dream ranching while also practicing as a large animal veterinarian. Later in life he opened a Veterinary clinic specializing in small animals in Tucumcari.

He loved music and playing drums.  He was a founding member of the “Jive Five” while attending NMSU. He also enjoyed singing in the choir at Center Street United Methodist Church in Tucumcari.  He was an active member of the Tucumcari Rotary Club, and was instrumental in organizing the annual Tucumcari Air Show as well as the Mesa Redondo Cowboy Camp meetings.

He is survived by his wife; a son, Joel Farmer of Clovis, NM; two daughters, Vicki Bryan and husband Craig of Amarillo, and Christy Barnett and husband Tommy of Wichita, KS; three granddaughters, Ashley Divine of Spokane, WA, Erica Patterson and husband Ryan of Plano, TX, and Elissa Mitchell and husband Merritt of South Korea: and numerous nephews.

The family suggest memorials be made to the Alzheimer’s Association.