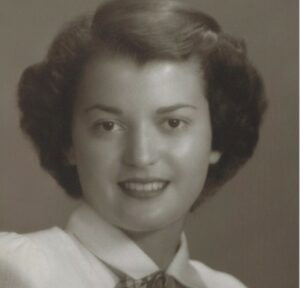 Donna was the second daughter born to Irene and A.J. “Del” Beagle in Casper, Wyoming on January 3, 1931. She grew up in Pampa, Texas, attending Pampa High School through her junior year, then graduated from Ferry Hall in Lake Forest, Illinois. Donna attended Northwestern University in Evanston, IL, followed by a year at University of Texas in Austin, where she was a Pi Beta Phi. In 1951, she moved to Bel Aire, CA, where she attended the Wright MacMahon School. Obviously tired of moving, she returned to Pampa and married the boy next door. Gene Sidwell and Donna Beagle were husband and wife for 64 years until his death in 2016.

Donna’s gracious personality was reflected in the countless friends that gravitated to her house for afternoon fellowship. An avid needle pointer who turned out hundreds of pieces, she was solely responsible for the thread shortage of 1979. Donna loved Jesus Christ and her calling was bible study. Well versed in doctrine, Donna lived her life by her Christian convictions.

The family owes a debt of gratitude to caregivers Jerry Acey, Sonia Flores, Nora Mauricio, Christina Sparks and Sybil Evans. Words cannot express what you mean to us.