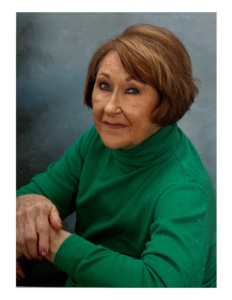 Daphna Wilson Fuller, 84, of Amarillo, TX, beloved mother, grandmother, and friend, went to be with the Lord on October 13, 2019 surrounded by her family.

She was born November 8, 1934 in Higgins Texas.  Daphna graduated from Higgins High School in 1952 and from San Jacinto Beauty School in 1953.  She was an accomplished hairdresser in Amarillo for over 66 years.  Daphna married Harold Fuller on September 4, 1954.  Harold and Daphna enjoyed traveling, boating, fishing, riding motorcycles, and their cabin in Black Lake, NM.

Daphna went on to establish her own beauty salons in Amarillo, Daphna’s Hair Affair at Las Tiendas and Daphna’s at 3300 Wimberly, then continued her love of hair dressing in her home salon until August 2019.  Many of her clients over the years had become her dearest friends.

She was a gifted gardener creating a lovely yard around her home.  For many years, friends and passersby admired her beautiful blooms and she received the Amarillo Chamber of Commerce Yard of Distinction Award.   She also enjoyed crossword puzzles, listening to Neil Diamond songs, watching sports, and keeping her home decorated.  She was an admirable hard worker, faithful friend, but above all, a wonderful mother and grandmother.

Daphna is survived by her daughter, Tracy Ann Starnes, her husband Robert, and their daughter Brynn, and son Blake Hampton, of Keller, Texas; and son, Thomas Michael Fuller, his wife Krystal, and their three children, Leif, Liam, and Lola, of Amarillo, Texas; her nephew, Paul Easterday, of Amarillo; niece, JoAnna Fairchild, of Clearwater, Florida; and sister-in-law, Thelma Hammer, of Fostoria, Ohio.

The family suggests memorials be to Gladney Center for Adoption, iamgladney.org