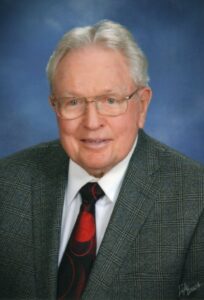 Dr. O’Brien was born on November 25, 1924 to Chester and Katie O’Brien in Fort Worth, TX.  He graduated from high school in Big Spring, TX, from Hardin-Simmons University and Southwestern Baptist Theological Seminary.

Dr. O’Brien married Bonnie Louise Ball on June 25, 1946 in Big Spring, TX.  He pastored Baptist churches in Big Spring, TX, Wolf Creek, KY, Denton, Gruver and Wellington, TX, and Tucumcari, NM. He was the founding pastor of Paramount Baptist Church, Amarillo, served as the Director of Missions for the Amarillo Baptist Association and as the Executive Director of the Baptist Convention of New Mexico. He retired from the full-time pastorate after serving as associate pastor of First Baptist Church, Amarillo.

Dr. O’Brien was a gifted pastor, teacher and administrator.  Other than time with his family, he loved nothing more than studying the Bible and passing along what he learned through preaching and teaching.

Dr. O’Brien was preceded in death by his wife, Bonnie and his parents, Chester and Katie O’Brien.