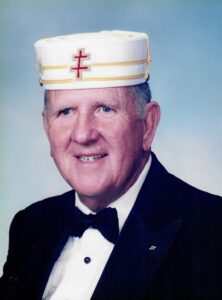 Charles was born to Sylar Williams Holt and Charles C. Holt, Sr. on November 4, 1922, in Dallas, TX. He graduated from Amarillo High School in 1940 and attended Draughon’s Business College and Amarillo College. He worked during the war effort at Pantex and at Amarillo Air Force Base as a civilian, as due to his eyesight he was unable to serve otherwise.

Charles married Montie Kaye Denney in 1949, who preceded him in death on March 16, 2005. They owned Holt Motor and Holt Homes until their retirement.

Charles was a 60+ year member of The Grand Lodge of Texas. He was a 33rd Degree Scottish Rite Freemason and Past Master of Palo Duro Masonic Lodge No.1239, Amarillo Lodge No. 731 and Panhandle Masonic Lodge No.1167, as well as Past Commander of Amarillo Commandry No. 48 Knights Templar. Charles was a member of Khiva Shrine Temple, Past President of Amarillo Patrol Unit and a member of the Camel Herders Degree Team. He loved and enjoyed all that masonry had to offer, in every way.

Charles was a member of Paramount Baptist Church and enjoyed his fellowship through their Joy Class, Kaye’s Sunday School Class, that always remembered him. He also loved listening to First Baptist Church services.

Survivors include his daughter, Karen Kaye Marshall and her husband Craig of Germantown, TN.