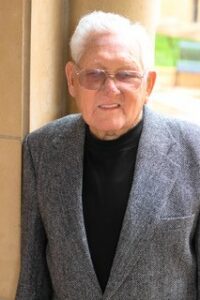 Services will be at 2:00 P.M., Thursday, May 16, 2019, at First Baptist Church Chapel with Corky Holland officiating. Burial will be at Llano Cemetery. Arrangements are by Boxwell Brothers Funeral Directors, Amarillo.

Billy was born on April 21, 1923, in Ada, OK to Willis and Roxie Orcutt. He attended Lakeview Grade school, Turkey High School, West Texas A&M University, and Amarillo College. Billy served in World War II in the Pacific Theater as a Corporal in the Army Anti-Aircraft Battalion. He is a Master Mason for the Masonic Lodge. Billy worked for Pantex as the Safety Engineer from 1951-1987. He married Esther on December 29, 1986 in Amarillo. He was a member of First Baptist Church.

He is preceded in death by his wife, Esther Orcutt.

He is survived by his daughter, Shirley Orcutt-Jones, of Amarillo, TX; granddaughters, Amanda Bessire Tydlaska and her husband Jay, of Fort Worth, TX, and BreAnne McCleskey and husband Corey, of Tahoka, TX; Grandsons, Joseph Dagan Jones, of Amarillo, TX, and Jacob Colby Jones and wife Candace, of Pampa, TX; and five great-grandchildren.